Unfortunately this post may have come a bit too late for the first third of my beer challenge but it has come just in time for Beer No 100 (more later). If anything, this post may help others who want to take up the 365 challenge and are as geeky as me when it comes to beers (and many other things). The ‘drinking beer by numbers’ idea came from a friend, Simon Clay (comic fan and fellow geek, why didn’t I think of it?!?!) who stated slightly too late that I should drink beers with numbers in their names in the correct number order in the 365 beer challenge i.e XT3 by XT brewery should be drunk as beer No 3. That got me to thinking, what beers could I have drunk at the right number positions? Are there any beers that I can drink with numbers that would fit the rest of the challenge?

Turns out that there are quite a few beer names with numbers in that could be drunk between numbers 1 and 9. Somewhat spoilt for choice with these lower numbers. My first mention goes to XT brewery, based in Long Crendon (near Thame, Buckinghamshire). They produce a range of beers from XT1 all the way up to XT9.

XT1 is a blonde beer and XT9 is a porter with the other XT numbers pertaining to the beer categories in between from Golden ales to IPAs to rich rubys to dark malts.  What better way to drink the beers that you like! You know exactly what type of beer you are getting from the number. I think this is the ultimate drinking by numbers. I experienced the full choice of all these beers this time last year when we went to the XT Beer Festival at the Lamb and Flag (with Carol and Andy, regular drinking partners). All 9 beers were available to choose from including an XT Fresh Hop 1. I didn’t try all 9 but, if memory serves me correctly, I tried at 4 or 5. This year so far I have only had XT3. 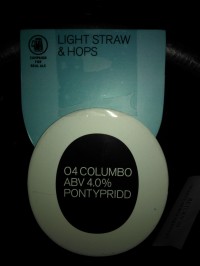 My second mention goes to Otley Brewery, based in Pontypridd, Wales. Otley Brewery have a similar offering to XT Brewery where they have named some of their beers from O1 to O6. But in this case the increase in number does not relate to an increase in colour like the XT beers and most of the beers also have a name. I tried O4 columbo at the recent beer festival I went to at the Royal Blenheim celebrating Welsh Beers.

My last main mention goes to Brew By Numbers (BBNo). A new brewery in London that I have not heard too much about. They have a Facebook page and the website is under construction. They have a number of beers available which include o1: saison, 02: Golden ale, 03: porter, 04: Berlinner weisse, 06: belgian blonde, 07: witbier, 09: brown ale, 10: coffee porter and 13: Brett aged. The labels on the bottles that I have seen have two numbers. I can only speculate that the first number relates to the type of beer and the second number relates to the batch number. I am looking forward to trying some of these. I am pretty sure I saw some bottles in the fridge behind the bar at the Craft Beer Co in Clerkenwell. I wonder if they do takeaways?

I have also found a few other beers with numbers which are: Ramsgate Brewery’s Gadds No 3 Premium Pale Ale, Gadds No 5 Best Bitter Ale and Gadds No 7 Pale Bitter Ale, Williams Bros Brewery’s Seven Giraffes and Magic 8 Ball by Magic Rock Brewing Co.

The higher numbers, between 10 and 100, this is where it starts to get more difficult. There is only a few to be found. If we take a look at XT Brewery again, they have done a number of specials over the last year with higher numbers. These are: XT13, a pacific red ale which I have had this year (a very nice red ale), XT25, which I had over christmas, XT42, a stronger version of XT4, XT53, a pale ale made for the Jubilee celebrations last year and XT80.

In my search for new beers to try I have come across only a few other beers with high numbers. These are: Ringwood’s Fortyniner, Ramsgate Brewery’s Gadds 80 Shilling, Williams Bros’ 80 shilling Scottish ale and Odell Brewing Co’s 90 shilling ale. One beer that I have tried very recently at Beer No 74 (25 beers to early) was 99 Red Baboons by Blue Monkey Brewery. I really like the name (they also have a beer called ‘Tie a Yellow Gibbon’) and the flavour of the beer. A dark ruby beer that is neither a porter or a mild and has a fruity, malty taste.

So this brings me onto Beer No 100, the beer that I have just finished on Conchi’s birthday (I thought it a fitting way to celebrate both milestones). The only beer that I have managed to drink at the right number, well sort of. I say ‘sort of’ because the beer does not have a number in the title. The beer in question is Centurion’s Ghost Ale by York Brewery. The idea behind drinking this beer as Beer No 100 being that Centurion relates to 100 because Roman Centurion’s commanded 100 men. Although according to Wikipedia they only commanded 60-80 men, I am going to ignore this and go with the 100 men misconception. Centurion after all is based on the latin for century (100 years). So in the 365 challenge I am 100 beers down, 71 days in and 265 more beers to go.

As for the question, are there any beers that I can drink with numbers that would fit the rest of the challenge? I have found only one beer so far, a black IPA by Windsor and Eton called Conqueror 1075. Maybe I could drink this beer at No 1075 in three years time! Any beer suggestions for numbers 101 to 365 will be gratefully received.

4 comments on “Drinking beer by numbers….and Beer No 100”

Beer for the Year 365 Beers in 365 Days Challenge Countdown